With Stability in Somalia Everybody Wins – UN envoy

With Stability in Somalia Everybody Wins – UN envoy

"Somalia's enormous potential will not be realised unless there is stability."

That was the key message of the United Nations envoy to Somalia at a gathering of leaders from the country’s Federal Member States over the past two days.

Starting on Monday and held in the southern port city of Kismayo, the meeting of the Council of Inter-state Cooperation (CIC) brought together the presidents of Puntland, HirShabelle, Galmudug and South West states, as well as Jubaland, of which Kismayo is the capital.

Addressing the gathered leaders, the UN Secretary-General’s Special Representative for Somalia encouraged the state leaders to strengthen cooperation between their governments and the federal authorities, noting how doing so can create stable conditions beneficial to all Somalis.

Mr. Keating listed the areas in which action was needed to achieve this goal. They included tangible progress in building security forces that are both capable and trusted, adopting a justice model, clarifying constitutional arrangements and power-sharing arrangements, passing an electoral law, and increasing revenues on the basis of resource- and revenue-sharing agreements. 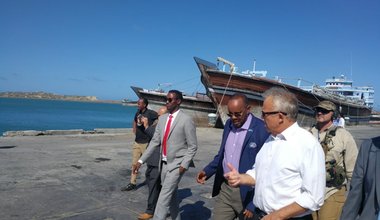 "Without these, all Somalis stand to lose – with them, everybody wins, including the millions of people who deserve a better quality of life,” the UN envoy said yesterday. “Success depends upon trust between and collective action by the federal government and Federal Member States."

The Special Representative emphasized that the meeting in Kismayo provided an opportunity to move things forward in the right direction.

Later, the UN official visited the port of Kismayo, where he spoke with Jubaland's minister of finance and learned about the economic and trade activity enabled by the city's location on the Indian Ocean, and the plans to improve the port's infrastructure.

Today, on the second day of his two-day visit to Kismayo, the UN envoy saw first-hand the operations of a returnee waystation supported by the Office of the UN High Commissioner for Refugees (UNHCR).

The centre, run in collaboration with the non-governmental organization Mercy Corps, is equipped to receive refugees who are returning to Somalia from Kenya, mostly from the latter’s Dadaab refugee complex, which has more than 200,000 registered refugees and asylum seekers.

At the waystation, the refugees are given basic medical attention, shelter and hot meals for a few days together with a small stipend that can help them reach and get established at their final destinations, often far away from the city. 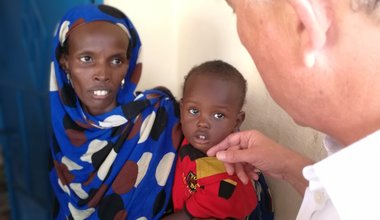 “What I was most impressed by in this centre when talking to a group of returnees was that they were absolutely delighted to be back in Somalia – it is their own country, their own culture, and have a tremendous sense of liberation,” Mr. Keating said.

“But they also mention some of the problems they face. The two that struck me were shelter – it is very difficult to find a place to live, finding a place with spare space for them – and the other one is getting jobs,” he added. “Ultimately it is up to the local authorities and themselves to find solution to some of these problems. The UN and its partners will do as much as possible, but this is going to be a long haul.”

On the outskirts of Kismayo, Mr. Keating visited a new settlement development intended to house a combination of returnee refugees, internally displaced persons, and marginalized people from within the area.

The settlement features most of the basic services a community needs, such as a school, marketplace, basic health centre, and even its own fledging solar power station, aiming to make the area self-sufficient in terms of energy needs in the short-term. 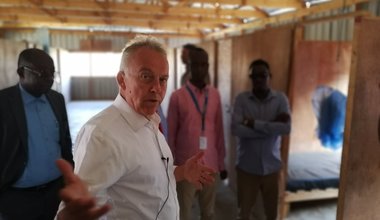 “I was able to see UNHCR, the local authorities and non-governmental organizations working together to build shelters. This facility can house around 800 people, and I was told there are other similar settlements being developed in the immediate neighborhood. I imagine that demand for these settlements far outstrips supply, but as a model of the government providing the land, UNHCR providing the money and some practical support […] it is very encouraging. The question is if it is enough for Somalia, with 2.6 million refugees,” Mr. Keating said at the settlement.

“The broader point I would make,” he continued, “is that we are seeing urbanization in action, due to changing climatic and environmental conditions, conflicts and marginalization. If these settlements are bringing a degree of order, giving the people a dignified living in urban areas, then it is really very encouraging.”