Mogadishu - In 2005, Dr. Abdirahman Ali Awale – or Dr. ‘Habeeb’ as he is commonly known – was walking down a street in the Somali capital when he saw something which changed his life: the reaction of some local residents to a small group of girls suffering from mental illness.

“I saw five young girls being chased and insulted on the streets of Mogadishu by a mob,” Dr. ‘Habeeb’ says. “That was when I realized that mental health was an issue of big concern in my community.”

The cruel treatment meted out to the girls that day prompted the 58-year-old psychiatrist, from Shibis district in Mogadishu, to do something about it.

With the help of supporters, he opened the Habeeb Mental Health Hospital in 2005, specializing in the treatment of mental illness and personality disorders – and one of Somalia’s first such establishments since the start of the civil war in 1991. He admitted 30 patients soon after opening.

Since then, Dr. ‘Habeeb’s’ medical practice and services have grown, expanding beyond Mogadishu. He now runs ten other psychiatric centres throughout the country, in Buhoodle, Caabudwaaq, Gaalkayo, Cadaado, Belet Weyne, Marka, Beled Hawo and Kismaayo.

“Our branch in Beled Hawo, in the Gedo region is called the ‘Habeeb Triangle Mental Hospital,’ in reference to patients who are admitted from Somalia, Kenya and Ethiopia,” he says. “Patients with a history of drug and substance abuse are also brought in from the United States.”

The facilities provide outpatient consultation, and most inpatient cases are treated for bipolar disorders, schizophrenia, anxiety, depression, dementia, epilepsy, psychosis and conditions associated with substance abuse, among others.

Asides from the centres, Dr. ‘Habeeb’ also makes house calls, providing treatment for patients at home and in their communities.

“Mental health is sometimes symptomatic of problems a patient may be experiencing at a certain time. Sometimes, the patients just need treatment of the underlying issues causing them mental anguish,” he notes. 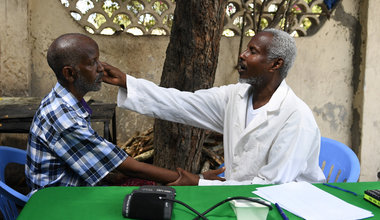 The state of mental health in Somalia has been on the back burner of health priorities for decades. Mental health disorders peaked in the Horn of Africa country during its civil war in the 1990s, but after the war ended there were limited resources to deal with them.

According to an analysis by the UN World Health Organization (WHO) carried out in 2010, it was estimated that the prevalence of such disorders was higher in Somalia than in other low-income and war-torn countries, with one person out of three affected by some kind of mental illness. Causes for this included overall insecurity, war trauma, poverty, unemployment and substance abuse. It also found that mental health had been an underfunded and neglected sector in Somalia due to poor allocation of resources by the donor community as well as by public health local authorities.

As in many other countries, mental illness in Somalia is associated with a strong social stigma, which means that many patients continue to suffer neglect and forced confinement inside their homes and other institutions. Keeping mentally ill people in chains and shackles has been an all too common practice.

“Unless we stop the stigma associated with mental health issues, we will not be able to properly treat and care for these patients,” Dr. ‘Habeeb’ says.

The psychiatrist believes that Somalia’s mental health burden can only be reduced with proper treatment and medical care of patients, as well as changing people’s perceptions of psychiatric illness.

“There is a need to integrate mental health care within the mainstream health and social education services to aptly respond to this health burden,” he says.

To that end, the physician has endeavoured to raise awareness of mental health issues through advocacy campaigns across the country.

“I used to go to 16 secondary schools and give one-hour lectures on mental health, explaining that mental disorders are not unique to Somalia and that they are curable,” he notes.

His outreach activities in schools expanded to include the training of select students in mental health treatment to help with free medical camps for sufferers of mental illness.

In recent years, the UN has provided support in various ways. This includes the provision of training for mental health professionals, as well as initiatives such as the WHO’s ‘Chain Free Initiative,’ which aims to restore the rights and dignity of mentally-ill persons by advocating for chain-free hospitals, chain-free homes and a chain-free environment that offer an improved quality of life.