Mogadishu – Dozens of youth hit the pavement in the Somali capital today, taking part in the city’s first mini-marathon in decades to mark the International Day of Sport for Development and Peace.

The four-kilometre race, which took place on some of Mogadishu’s main roads amid sweltering conditions, was organised by the Federal Ministry of Youth and Sports to promote peace and unity among youth.

While mainly attracting young competitors, the event also brought together people from all walks of life, including sports enthusiasts, professional and amateur athletes, and spectators. Those in attendance included one of the country’s best-known and revered athletes, Abdi Bile Abdi, who won the 1500-metre races at the World Championships in Athletics in Rome in 1987 and the International Association of Athletics Federations’ World Cup championship two years later.

“Our youth are our future and they need our unwavering support, to protect them from any harm so that they become productive and useful members of the society tomorrow,” said the retired athlete, who also represented Somalia in the 1500-metre track event at the 1996 Summer Olympics in the U.S. city of Atlanta.

Speaking before the start of the race, Somalia’s Minister of Youth and Sports, Khadija Mohamed Diriye, cited Mr. Bile as an example for participants, especially the younger ones, to emulate.

“Whoever works hard can be just like Abdi Bile Abdi and even better than him,” she said, adding that her ministry had launched sports projects countrywide to help promote and advance peace and development. 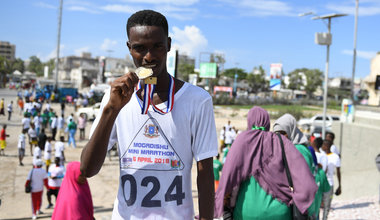 In remarks delivered at the end of the event, Mogadishu’s Mayor Abdirahman Omar Osman, also known as ‘Yarisow,’ urged Somali youth to embrace activities such as sports for the benefits it can have for both individuals and Somali society.

“I would like to tell our young people that peace is in our hands and we can create development. If we come together, work together, cooperate with one another, work towards our common good, our unity and solidarity, we will be unshakeable,” he said. “We can achieve anything we want.”

The top three places in the mini-marathon were taken, respectively, by Ali iidow Hassan, Mohamed Muhidin Yalahow and Abdisalam Mohamed Ahmed – all of whom are members of Somalia’s national football team.

“I am very happy to win this marathon. I wouldn’t have achieved this without the support of the Somali Olympic team and my trainers. They believed in me and encouraged me to work hard,” said a jubilant Ali, soon after crossing the finish line.

As well as taking place on the International Day of Sport for Development and Peace, today’s race also coincided with Somalia’s National Sports Day.

Sport is acknowledged by the United Nations as a tool for social progress, that can be used to inspire youth to engage in peacebuilding and development activities in countries that have experienced conflict such as Somalia. In 2013, the United Nations set aside 6 April as the date to mark the International Day, which aims to promote goodwill and positive social outcomes through sports achievements.