Baidoa– Accompanying Somalia’s newly-appointed drought envoy on his first field visit today, the United Nations’ top humanitarian official for the Horn of Africa country warned of the devastating outlook for millions of affected Somalis amidst heightened risks of famine.

“The situation is extremely dire and grim: 7.1 million people are going to be affected by this drought situation before the end of this year,” said the Humanitarian Coordinator for Somalia, Adam Abdelmoula.

“Unfortunately, about 1.4 million children are facing acute malnutrition this year, and 330,000 are likely to become severely malnourished,” he added. 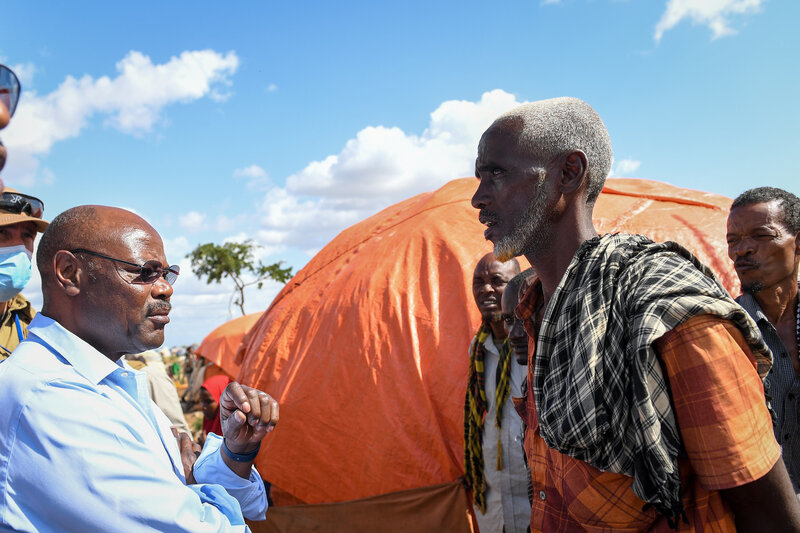 As of May, according to a recent report of the UN Office for the Coordination of Humanitarian Affairs (OCHA), some 6.1 million Somalis have been affected by the drought emergency. Of that amount, 771,400 have been displaced from their homes in search of water, food and pasture; the majority are women and children. The outlook has worsened due to the prospects of a fifth consecutive failed rainy season.

Mr. Abdelmoula was speaking at the ‘ADC’ camp for internally displaced people (IDP) in the Baidoa district of Somalia’s South West State. He was accompanying Somalia’s Special Envoy for Drought Response, Abdirahman Abdishakur, who was appointed by the Somali president in late May, on his visit to an IDP camp.

OCHA has stated that during April to mid-May this year, light to moderate rain was recorded in parts of southern, central and north-western Somalia, and there were localized storms and flash flooding in some areas. 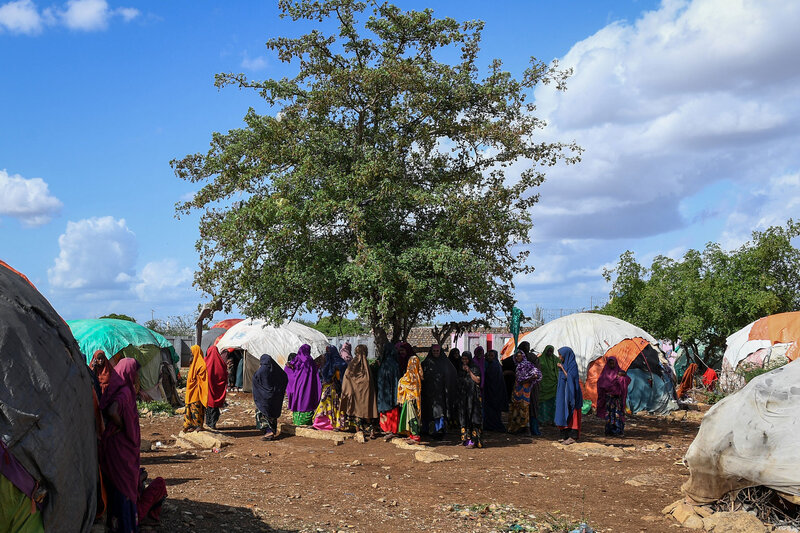 But the amount of rain was below average, poorly distributed and insufficient to alleviate the current drought conditions.

As a result of the poor rains, Somalia is facing a fourth consecutive failed rainy season and a heightened risk of localized famine in six areas – including in South West State – particularly if food prices continue to rise and humanitarian assistance is not sustained to reach the most vulnerable people.

Additionally, the next rainy season is projected to be below average, meaning the drought emergency will worsen. As the country faces the risk of famine in those six areas, humanitarian entities are transitioning the thrust of their activities from drought response to famine prevention, re-orienting responses to target the most vulnerable populations and developing a famine prevention plan.

South West State’s Baidoa district is one of the areas of Somalia that has been hit hardest by the current drought.

Since the beginning of the year, 230,000 people have been displaced into South West State. Its Bay region has the highest number of people experiencing acute food insecurity; this is in addition to high rates of malnutrition, particularly in Baidoa IDP camps. Since March, cases of acute watery diarhhea have been rising, with a cumulative total 2,279 cases, including 11 deaths, reported since January this year.

“I am here to mobilize, as much as possible, resources, and coordinate the effort of humanitarian assistance. Baidoa is where people who are most affected have arrived recently – close to half of them who are displaced by drought are here in Baidoa,” said Mr. Abdishakur at the ‘ADC’ camp. “We call on the international community to double their efforts and support Somali people in this difficult time.”

Mr. Abdelmoula, who also serves as the UN Secretary-General’s Deputy Special Representative for Somalia and UN Resident Coordinator, noted that the world body and its partners can only do so much without more resources. 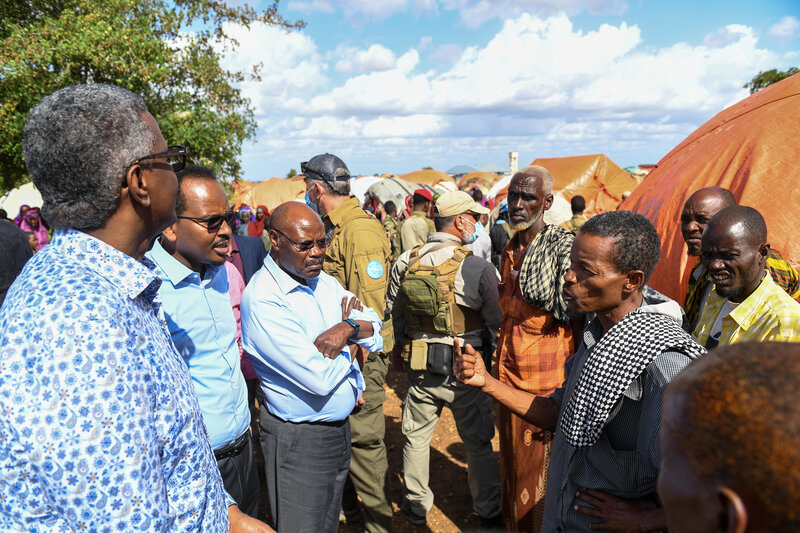 The funding for this year’s Humanitarian Response Plan for Somalia, which seeks about $1.5 billion to assist 5.5 million of the most vulnerable Somalis, remains low at 15.7 per cent as of 20 May.

“With the limited resources that we have, we have only been able, between the months of January and April, to reach 2.4 million out of all those in need of humanitarian assistance,” the Humanitarian Coordinator said.

The Special Envoy and the Humanitarian Coordinator intend to carry out more joint field visits in the near future.