The 32–year–old who is currently a director, analyst, researcher, lecturer, and blogger epitomises Somali youth’s struggles and resiliencies - get quality education, help family and rebuild the country.

Born in Buulaburte town in Hiiraan region in late 1988, he left his hometown after completing his primary school at the Ahmed Gurey School in June 2006.

“The town had no secondary school. I went to Belet Weyne to pursue a secondary education at Sheikh Mohamed Moalin School,” he said.

Upon finishing high school in June 2009, he encountered another obstacle:  Belet Weyne had no university.

“The nearest possible place I could access higher education was Mogadishu. I came to Mogadishu on 14 August 2009 to study at a university, at the time when many of its inhabitants were either being killed in or running away from conflict in the city,” he said.

He started his Bachelor’s degree in Public Administration at Mogadishu University in September 2009.

After four years, he not only graduated with an undergraduate degree but also with two diplomas in Law and English respectively.

His English skills opened many doors for him.

“When I finished the English Language diploma in November 2011, it gave me the opportunity to be recruited as an English teacher at SYL Primary and Secondary School.  Between 2013 and 2015, I had the opportunity to work with several organisations. I become a lecturer at the same university I graduated from, Mogadishu University, in February 2014. I still teach public policy and administration courses at the university,” he noted.

Mr Wasuge’s quest to educate himself did not stop with the undergraduate degree and diplomas.

“In September 2015, I enrolled online for a Master’s in Public Administration at the University of Roehampton in London. I earned my Master’s degree in mid-2018,” he said.

Mr Wasuge is currently the executive director of the Somali Public Agenda (SPA). He founded SPA in January 2018 after working as a researcher for over four years at the Heritage Institute of Policy Studies in Mogadishu. 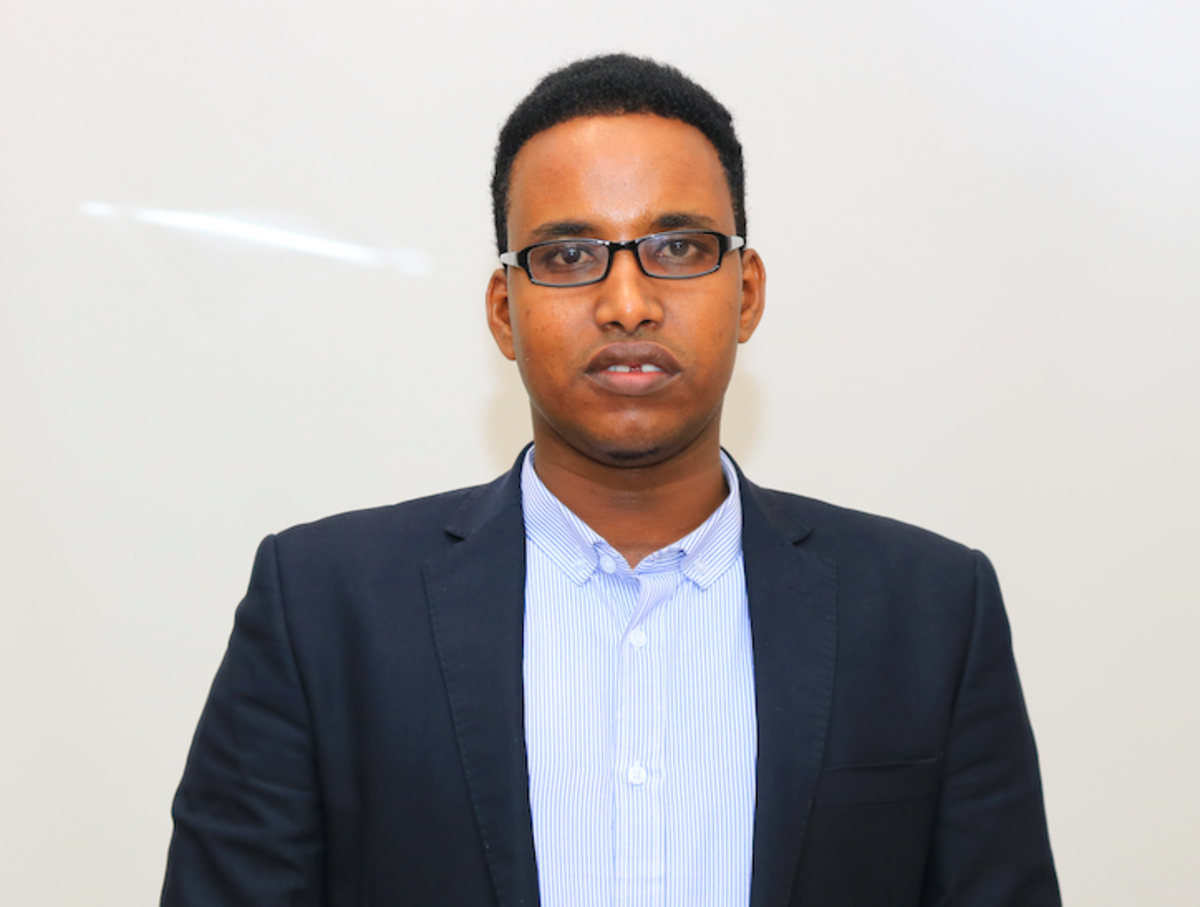 He noted that when he established SPA, many studies and analysis about Somalia lacked local experiences and contexts.

Many Somalis who studied locally were unable to contribute to the production of knowledge in Somalia due to the lack of a platform like SPA.

“I thought that establishing SPA would help us (Somalis) tell our own stories and let others listen to what we say about our own country.  However, my main motivation was how we could contribute to better services for the public and the young generation.  SPA’s mission is pursuing public service excellence in Somalia,” said the 32-year-old Executive Director.

SPA does research that informs policymakers, the international community and the general public on key governance and public service issues in Somalia.  As part of its public engagement efforts, it has created the Public Agenda Forum and SPA Podcasts. Both are means to engage and inform policymakers and the public.

In addition, it has two centres dedicated to the training and co-designing of human-centred public policies and services.

“Having lived and grown up in Somalia at a time when there was no functioning government to provide basic public services, I founded SPA to contribute to the understanding and improvement of governance and service provision in Somalia,” he posited.

“First, SPA undertakes policy-oriented and evidence-based research. Second, based on the findings and policy recommendations of the studies, SPA helps design public policies, programmes and projects with the relevant authorities. Third, SPA offers short training courses to contribute to the building of administrative cadres that can deliver public policies and programmes to the community,” he said.

So far, SPA’s achievements are impressive.

“In the three years and six months since we started, we have achieved a lot. We were able to produce thirteen (13) governance briefs, twenty-eight (28) commentaries on current issues, three (3) research reports, and seventeen (17) podcasts on issues of governance and public services. Our publications are also available in Somali language. This is huge given the financial and security limitations we have been working under,” he said. 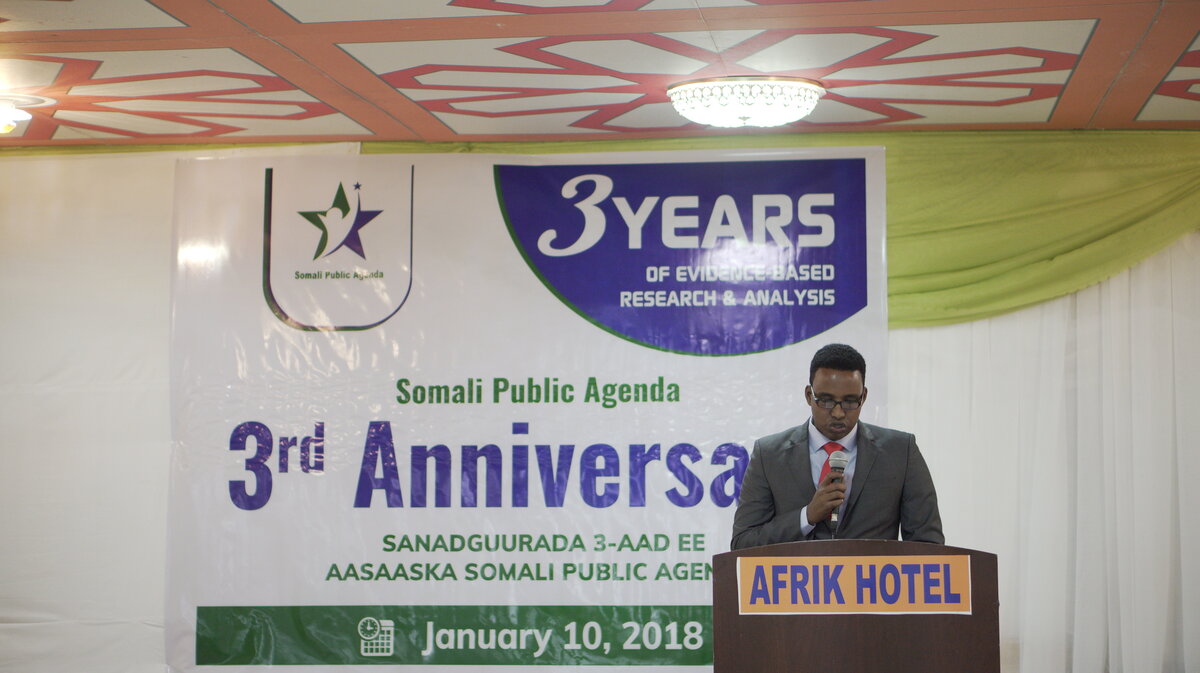 SPA, as a non-profit public policy and administration research organization, received many praises from the policymakers for the work it has done, notably its election series programme.

“When we published a brief on the election bill in July 2019, a member of the 15-member House of the People ad hoc committee described our analysis as objective. They also invited us to give them broader insights from our research,” he said.

Local and international media outlets have also engaged them for their expertise on Somalia’s political, economic, security, humanitarian and social affairs.

“I believe that we have so far achieved the realisation that we (Somalis) can tell our stories and educate others about Somalia issues,” Mr Wasuge said.

The pandemic did not deter SPA from carrying out its vital task of informing and educating the public on governance issues, especially analytical products focusing on understanding the socio-economic impact of COVID-19.

“Although we did not include COVID-19 related analysis and studies in our initial yearly research plan, we re-adjusted our work with the outbreak of the devastating pandemic in 2020. We managed to produce three commentaries, one governance brief, and one research report on the COVID-19 pandemic,” he said.

He added “We analysed COVID-19 related social stigma, its impact on the informal economy, its effect on higher education institutions, and the response to it by the different levels of government. These studies and analyses were all self-financed.”

He noted that the credit for the achievements so far go to the SPA team for their role in the publications, especially at a time when they were working from home and doing most of the interviews over the phone.

He also pointed out he will invest more time and efforts in SPA work in the coming years.

“I believe that we are doing very important work for the country. Together with my colleagues, I will work to make SPA a centre for research, dialogue, and policy design and capacity developments. My plan is also to make sure that SPA has financial independence and that it will keep up its good work without my presence,” he said.