Maryan Nuh Muse: An Olympian athlete competing for herself, her country and for Somali girls

Maryan Nuh Muse: An Olympian athlete competing for herself, her country and for Somali girls

Mogadishu – At the crack of dawn, 21-year-old Maryan Nuh Muse leaves the comfort of her home in a suburb of Mogadishu for the athletic track at the Benadir Stadium, the capital’s largest outdoor sports arena.

The Olympian spends an hour sprinting along the sandy track with her squad, and, as Mogadishu stirs from its slumber, she concludes her morning exercises and starts getting ready for school.

From the stadium, she takes a 15-minute ride to the school on a motorised rickshaw, known as 'bajaj.'

“Education is very important, and at the same time, sports is one of my biggest motivators, because I want to become a successful athlete,” says Maryan, who has represented her homeland in youth tournaments across Africa and was one of two Somalis who competed in the 2016 Summer Olympics in Rio de Janeiro.

She finished last in her first heat in the 400-metre women’s race in Brazil, but her placement has not deterred her – she wants to become the first Somali to win an Olympic medal in the next Summer Olympics that will be held in Tokyo in 2020.

With no time to waste, Maryan cleans herself up and changes into her school uniform, she is in her last year of High School. Her life is a balance between athletics and studies, but her exuberance and resolve have helped her to succeed in sports. 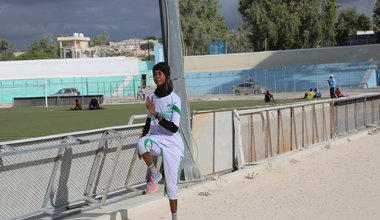 But she is also aware that her efforts are not solely centred on achievements on running tracks, that she also sets an example for other Somali girls.

In her capacity as a role model, Maryan is pushing for the inclusion of more Somali girls in sports activities.

“Sport is a catalyst for peace. When more girls join sports, they will have something that will bring positive change in their lives and those of others,” states Maryan.

It is a view that the president of the Somalia Athletics Federation, Khadija Aden Dahir, shares.

“Sports bring people together. In the countryside, sports reconcile clans because they forget about their clan identity and treat each other as brothers and sisters,” Khadija says, adding that sports can exert a profound effect on young people, especially girls.

“When they enrol in sports, they realise how beneficial it is as it promotes their health and physical well-being,” she notes. “It sets high expectations and promotes positive thoughts as one gets to meet people from different backgrounds.”

Although government agencies and some non-governmental organizations have invested in the development of sports in Somalia, available facilities are still insufficient to meet the demand among youth.

It is with this in mind that Maryan appeals for more support and better policies to promote the development of sports in Somalia.

Her call coincides with the International Day of Sport for Development and Peace, observed annually on 6 April, with the aim of bringing goodwill and positive social outcomes through sporting achievements.

Sport is also an important enabler of sustainable development, according to the United Nations. In the 2030 Agenda for Sustainable Development, the world body recognizes the growing contribution of sport to the realization of development and peace in its promotion of tolerance and respect and the contributions it makes to the empowerment of women and young people.