Qubaaye: How playing football can change a life and society

Qubaaye: How playing football can change a life and society

Mogadishu – Ronaldo. Messi. Neymar. The names of football greats who are celebrated by fans around the world, including those in Somalia.

Someday, the sport’s Somali fans could have a national idol of their very own if 21-year-old Abdikarim Abdalle Mohamud – known by the nickname ‘Qubaaye’ – has anything to say about it.

“I am very happy about the progress I have made so far,” says the football player, who hails from Mogadishu’s Waaberi district.

Earning a modest income from football, his training schedule is determined by the calendar of tournaments and competitions his club team competes in. When the football league season is on, his training regime is more intensive – and he wouldn’t have it any other way.

Qubaaye always aspired to be a top-league football player. He completed high school in 2012 – at 15 years of age – but did not pursue university education, opting instead to focus on football full-time.

His priority is to continue improving his skills until he gets his big break.

“Since I got involved in sports, I have experienced a lot of positive changes,” he says. “My physical and mental fitness has improved tremendously, and so have my skills in soccer.” 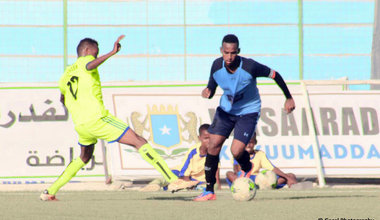 In 2013, the sportsman was selected for Somalia’s under-20 national team, and has represented his country in regional tournaments convened by the Council for East and Central Africa Football Associations.

Qubaaye has also played for Somalia in several World Cup pre-qualifiers. Although the national team’s efforts have yet to earn Somalia a berth in the global tournament, he is confident that his country will achieve that goal in the near future.

An outlet amidst the war

Born during Somalia’s civil war, Qubaaye, like many other youth, grew up amidst the devastation and poverty caused by the conflict. Sports provided an outlet.

“Sports saved me from the darkness that had engulfed me. You see, a lot of idle youth resort to crime, others join armed groups. Many others are killed during violent confrontations. I am happy and privileged to use my time building my career in football,” he says.

Due to its ability to promote cohesion, sports is recognized by the United Nations as a tool to build peace and development in post-conflict environments. As the world marks International Day of Sport for Development and Peace, young people like Qubaaye are being held up as examples of what sports can achieve, both individually and across societies.

“You will find players from different areas and clans playing for one club, or players from warring sides competing in a tournament. This breaks down the tensions and creates an atmosphere of harmony,” he says, referring to Somalia’s clan structures.

The United Nations recognizes sport is an important enabler of sustainable development. In the 2030 Agenda for Sustainable Development, the world body recognizes the growing contribution of sport to the realization of development and peace through its promotion of tolerance.

In her message for the day, the Director-General of the UN Educational, Scientific and Cultural Organization (UNESCO), Audrey Azoulay, said that sport is about both individual effort and collective effort.

“It relies upon the concepts of respect, understanding, integration and dialogue, and it contributes to the development and fulfilment of individuals regardless of age, gender, origins, beliefs and opinions. That is why sport is a unique forum for action and reflection to transform our societies,” she added.