Muna Haji Yussuf Ali had her first direct encounter with Al-Shabaab militants in 2012.

The Bay region of south-central Somalia was in the grip of the country’s worst famine in 60 years, and Muna was delivering aid supplies to drought victims in the town of Buurhakaba.

While doing so she was abducted at gunpoint by a group of jihadist fighters.

“They called me an infidel,” recalls the 25-year-old humanitarian aid worker, who was working for the non-profit Gargaar Relief and Development Organization at the time.

The fighters held her for two days until local elders negotiated her release.

Instead of putting her off the risky business of providing emergency relief supplies in a conflict zone, Muna’s kidnapping and brief detention steeled her resolve to serve communities in areas of the Somali countryside under the control of Al-Shabaab.

“I continued with my humanitarian work as though nothing happened,” she notes. “Life as a humanitarian worker is a delicate business between relieving suffering and staying alive. But it is work that I must continue to do.”

The abduction was not Muna’s first exposure to the perils posed by Al-Shabaab. 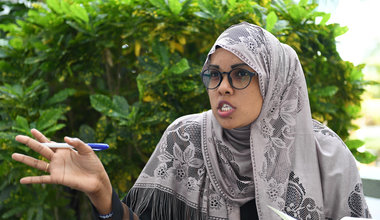 In 2007, during her first year of secondary school education in her hometown of Hudur in the Bakool region of southwestern Somalia, two teachers were brutally killed by jihadist militants, forcing the school’s closure.

The killings and the closure led Muna to join her sister, who was living in the northeastern port city of Bosaso, and pursue her studies there. But the five-day overland trek required Muna to travel through remote areas of the country under the sway of Al-Shabaab.

“Our driver had to negotiate his way through Al-Shabaab roadblocks by giving money to the militants to allow our vehicle to pass,” she explains.

In 2011 she made a bold decision to return to Hudur and help local residents of what is now Somalia’s South West State cope with one of the country’s worst droughts in recent history.

“I was appalled and saddened by the effects of the drought on my family, my home, my neighbours and the entire Bakool region,” recalls the Mogadishu University graduate. “I knew I had to find help and rescue my people from starvation. That is how I became a humanitarian worker.”

Muna has no regrets about her career choice.

“It is very fulfilling to see smiles on the faces of people, who would have otherwise starved to death,” she says. “That is what keeps me going.”

The United Nations recognizes the importance of work carried out by people like Muna, with 19 August observed annually around the globe as World Humanitarian Day in tribute to aid workers who risk their lives in humanitarian service, and to rally support for people affected by crises around the world.