In the course of his work in Somalia, Aweys Abdullahi Abdirahman has ducked bullets several times and survived death by a whisker, with his experiences delivering desperately needed humanitarian aid reading like a script from a Hollywood action movie.

The lot of a humanitarian aid worker assigned to the country’s volatile south-central region is not for the faint of heart – armed militias still control swathes of the countryside in that part of Somalia, denying tens of thousands access to humanitarian support.

“Those delivering critical support to civilians in the midst of conflict are real human beings who also fall victim to the same conflict,” explains the 29-year-old Aweys.

By his own account, Aweys’ life flashed before his eyes last year when Al-Shabaab militants ambushed his convoy, which was ferrying medical supplies from the capital, Mogadishu, to the Bay region in the country’s South West State.

“Our relief convoy came under a hail of bullets,” recalls Aweys, who hails from Hudur, Bakool region. “We were lucky on that day – we did not lose any lives or sustain injuries. However, the medical equipment was badly damaged and supplies were destroyed.”

Witnessing first-hand the violence and suffering has exacted a toll on the young humanitarian worker, who lost a close colleague in an attack last year.

“Our country director was killed in an explosion at a restaurant in Baidoa last September,” says Aweys. “They targeted him because he is a humanitarian worker who helps people out of poverty and starvation. It is a shame that they [Al-Shabaab] are killing their own people with such impunity.” 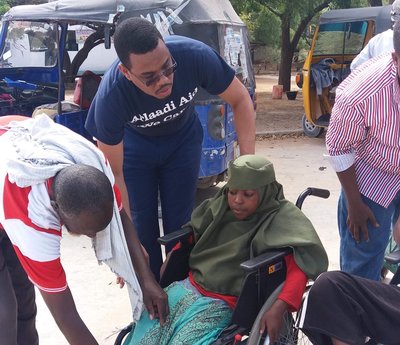 Despite the risks inherent in a country recovering from more than two decades of civil war, Aweys’ determination to continue helping Somalis in dire straits is unshaken.

“I find strength and fulfilment in helping others,” he adds. “It is rewarding and brings me inner peace.”

Aweys became a humanitarian worker in 2011 amidst Somalia’s worst drought in 60 years. A graduate of Simad University in management sciences, he wanted to aid Somali communities and help households cope with a catastrophic famine that killed more than 250,000 people.

He joined Arlaadi Aid, a non-profit organization that tackles poverty and teaches vulnerable communities to build up resilience. As head of its social corporate responsibility programme, Aweys works to mitigate the effects of adverse climate conditions. He says that that experience has taught him the importance of preparedness, and encouraged him to put in place sustainable programmes that can cushion communities from the vagaries of weather.

“Focusing on agricultural productivity for the farming community, water conservation projects, and the excavation of wells to provide water to livestock farmers throughout the year are just some of the ideas that can transform the lives of vulnerable groups in this country,” notes Aweys.

The selfless work of Aweys on behalf of the hungry and the displaced of Somalia has not spared him from receiving constant threats from Al-Shabaab, with the militant group often sending him hostile text messages. Like other humanitarian workers, his work is further complicated by Somalia’s recurring inter-clan conflicts.

But he insists he will never give up on his passion to help people in need.

“I have a conviction that Somalia will one day be free of poverty, hunger and insecurity,” Aweys says. “I pay tribute to all those in the humanitarian field for their courage, dedication and commitment to serve this cause.”

Observed each year on 19 August, World Humanitarian Day honours humanitarian workers who risk and sometimes lose their lives to help others, and advocates for their safety and security, and for the survival, well-being and dignity of people affected by crises.