Nasro Ismail Abdi: A staunch advocate for a peaceful Somalia

Nasro Ismail Abdi: A staunch advocate for a peaceful Somalia

Some of Nasro Ismail Abdi’s earliest memories are of violence and suffering.

She was born in 1994, in the Luq district of Gedo region in south-western Somalia – in the third year of her country’s civil war. Rival militias vied for control of the region, which sits along the international border with Kenya and Ethiopia.

“There used to be constant fighting, and in the process many civilians lost their lives for nothing,” Nasro recalls.

The turbulence of those years transformed Nasro into a staunch advocate of peace, and in 2017 she and some friends founded the Badbaado Youth Club to promote peace initiatives in the federal member state of Jubbaland, of which Gedo is a part of.

“We decided to establish the organization to fill the communication gap that existed between the (Jubbaland) regional administration and local youth,” she says. “This was important if peace initiatives launched in the region were to succeed.”

Now 24 years of age, she is a member of the teaching staff at Jubba University in the city of Kismaayo, where she obtained a nursing degree in 2017. Nasro says her choice of profession was also influenced by her dedication to the cause of peace in Somalia.

“I wanted to work with women and youth. When you improve the lives of the two, you contribute to peace and development,” she explains.

The Badbaado Youth Club organizes meetings, seminars and workshops that bring together young people and representatives of the regional administration to discuss how to improve relations and work together in stabilizing the region. Members of the youth club also visit local schools to discuss peace and security issues and urge students to actively participate in the development and peace agenda.

“It is important to focus on the youth if peace and stability are to be achieved,” Nasro notes. “They not only comprise the highest percentage of the population, but (they are) also vulnerable to misinformation and exploitation by those who do not mean well for Somalia.”

According to the 2016 Population Estimation Survey of Somalia conducted by the United Nations Population Fund (UNFPA), 81.5 per cent of the country’s population is under the age of 35.

“Our vision is to see a strong, united and active youth in Somalia, particularly in this region, who can strive with their counterparts in other parts of the world,” Nasro says.

The youth group’s vision is one shared by Somali authorities. In December last year, the Federal Government of Somalia held the second Somali National Youth Conference, at which it launched its National Youth Policy. The three-day event brought together hundreds of youth representatives from around the country, as well as the Secretary-General’s Envoy on Youth, Jayathma Wickramanayake. The youth policy aims to address challenges – in areas ranging from unemployment to violent extremism – by removing institutional barriers to youth development.

While the Badbaado Youth Club’s activities are hampered by a shortage of funding, Nasro and its members are determined to keep up their efforts. 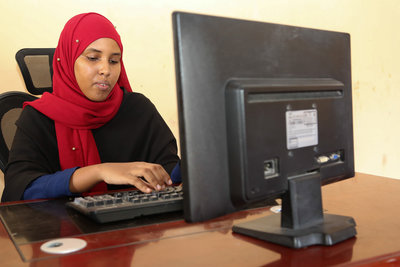 “Since its inception, the organization has not received funding to execute its activities. We depend on small contributions from the members, but they are not enough to cover all the planned activities,” she says.

She adds that she and her colleagues remain committed to developing good relations with community members – especially traditional elders, religious leaders, women and business people – that will earn the youth club wider acceptance within a community that was once at war with itself.

The United Nations has recognized the role that youth can play in international peace activities. This includes the adoption by the Security Council in 2015 of an historic first-ever resolution on youth, peace and security.

The resolution emphasized the importance of youth as agents of change in the maintenance and promotion of peace and security. Also, it highlighted participation, partnerships, prevention, protection and disengagement and re-integration as five pillars for action related to young people’s contribution to peace processes and conflict resolution.