Baidoa, Dhumuusareb, Garowe, Jowhar, Kismayo – In especially-convened consultations in cities around Somalia this week, Somali women gathered to discuss enhancing their role in the country’s peace and reconciliation process and to strengthen the fight against violent extremism which is impacting ongoing peace efforts.

“Our aim is to encourage the women to pass what they learnt here to their families, their villages, their districts and divisions; and educate them on the effects of violent extremism so as to achieve total peace in the country,” Ms. Madino Mohamed, the deputy chairperson of the Somali National Women’s Organization (SNWO), said at the meeting held in the southern city of Kismayo, the administrative capital of Jubbaland.

The SWNO was the main organizer of the two-day nationwide ‘peace forums’ on enhanced women’s roles in peace efforts, held simultaneously in the five administrative capitals of the Federal Member States of South West, Jubbaland, Puntland, HirShabelle and Galmudug states. The main purpose of the forums was to consult wide-range of women stakeholders – peace advocates, activists and practitioners – to determine ways and strategies to improve women’s role in promoting peace and prevent violent extremism in the country.

Participants across the five states discussed women’s empowerment and strategies that would enhance their participation in peace, security and reconciliation efforts. They also deliberated on ways to help preventing and countering violent extremism, in order to complement government efforts to de-radicalize youth.

In Kismayo, Ms. Badran Muhumed Abdulle, the chairperson of the Jubbaland Women’s Organization, said the forum had given women the impetus to actively participate in reconciliation and peace-building activities.

“If there is no peace there will be no progress,” she said. “Peace is the only thing that can bring development to Somalia.” 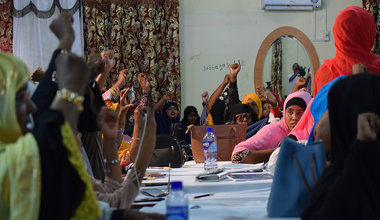 Key role for women to play

In her remarks at the forum there, SNWO’s chairperson, Ms. Batula Sheikh Ahmed Gabale, urged women to direct their efforts towards the unity of the country.  She also encouraged them to actively participate in the country’s politics and play a role in decision-making processes.

The top United Nations official for Somalia, the UN Secretary-General’s Special Representative, Michael Keating, attended the Garowe gathering, where he said that, “It is very obvious that Somalia’s problems are not going to be solved unless women are at the front and centre and that includes everything from health and education, to supporting families, through to business and the economy – but also security and, especially, conflict resolution.”

At the gathering in Baidoa, the capital of South West State, one of the facilitators, Udbi Omar Ali, highlighted that women were unanimous in wanting to play a more visible role in fighting violent extremism.

"We agreed to unite against extremist ideologies; that women should pay attention to all activities happening in their households, to prevent their children from getting sucked into extremism,” she said.

“At the civil society level, at the security sector level, as women, we should have a network, a channel of communication to get to know each other, so that we can work towards peace and reconciliation,” Ms. Ali added.

“The purpose of this forum is to coordinate the women under the Somali National Women’s Organization, in all the regional states, to focus on peace,” she said, in addition to describing women as the backbone of society and highlighting the key role they play in the development and restoration of peace in Somalia.

Resolutions made at the gatherings – which were supported by the United Nations Assistance Mission in Somalia (UNSOM) and United Nations Development Programme (UNDP) – will inform deliberations at a national Women’s Peace Forum, scheduled to take place in the capital Mogadishu, later this year. 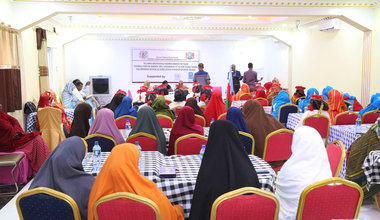 In 2000, the world body recognized the vital role that women can play in peace and security with the UN Security Council’s adoption of Security Council resolution 1325, which reaffirmed the important role of women in the prevention and resolution of conflicts, peace negotiations, peace-building, peacekeeping, humanitarian response and in post-conflict reconstruction.