In Security Council briefing, UN envoy highlights achievements and need for cooperation for progress to continue

In Security Council briefing, UN envoy highlights achievements and need for cooperation for progress to continue

New York – In his first briefing to the Security Council, the United Nations envoy to Somalia highlighted the progress the country has made in many areas, while flagging that the window to continue achieving that progress was narrowing without greater cooperation.

“In my travels around the country I have observed many examples of recovery, development, improving security, and functional state institutions. I have been deeply impressed – even moved – by the resilience, commitment, and courage of Somalis I have encountered,” the Secretary-General’s Special Representative for Somalia, James Swan, told the Council members in a meeting at UN Headquarters in New York.

“This progress is testimony to the ambitious – but achievable – peacebuilding and state-building agenda, to which Somalia’s leaders are committed,” he added.

However, while acknowledging the gains in several priority areas – ranging from constitutional reform to advances in security operations and security sector reforms, as well as in achieving debt relief and delivering on anticipated national elections – the UN official also noted the need to build on these gains soon.

“The window to achieve further necessary progress on these issues is narrowing,” Mr. Swan said. “Key benchmarks risk falling behind agreed timelines. Further progress may be delayed without renewed dialogue and cooperation among all stakeholders.”

The UN Special Representative said achieving these goals between now and 2020 will require accelerated efforts in the next several months. He emphasized the need for political consensus and compromise among Somali leaders at the national level – both the executive and legislative – and particularly between the federal authorities and Federal Member States, on how best advance.

The UN Special Representative took up his assignment in late June. Since then, he has visited each of the country’s Federal Member States and Somaliland, and met with its federal and state leaders, as well as a range of representatives from civil society. 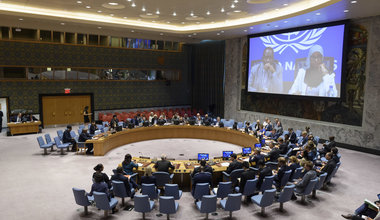 On the electoral front, Mr. Swan said the national electoral cycle in 2020/21 offers an opportunity to advance decisively the process of democratization, and noted that technical preparations continue to make progress, with a draft electoral law under review by the Federal Parliament, and the National Independent Electoral Commission preparing for voter registration.

“I encourage Parliament’s House of the People to expedite its review and adoption of the electoral bill, including further consultations to achieve broad political support,” he said. “To that end, I welcome the resumption of cooperation between the two Houses of Parliament.”

Referring to the constitutional review process currently underway, the UN envoy spoke of how the Federal Constitution, once adopted, will provide a common vision for all Somalis, while defining clearly the respective roles of the organs of the federal state, and relations with and between Federal Member States.

“Progress has been made in the technical review process,” Mr. Swan said, “but Somalis need now to pursue an inclusive dialogue to reach agreement on outstanding critical issues, including the allocation of powers, intergovernmental relations, system of governance, resource sharing, and the status of Mogadishu.”

Speaking about security in Somalia, the UN Special Representative noted that the security situation in Somalia remains a serious concern. He cited the Al-Shabaab attack on the Benadir Regional Administration on 24 July – which killed the regional governor and mayor of Mogadishu as an example of the threat that terrorism continues to poses to progress.

However, he also highlighted that there have been some encouraging security developments. In this respect, he spoke of how Somali Security Forces, working with the African Union Mission in Somalia (AMISOM), the United Nations and international partners, are making progress in recovering and stabilizing areas of Lower Shabelle, on the periphery of Mogadishu that had been held by al-Shabaab.

“These operations have shown the effectiveness of this collaboration and reinforced the commitment of key security actors to the Comprehensive Approach to Security,” Mr. Swan said. 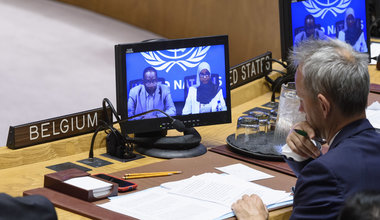 Referring to Somalia’s steady progress towards economic recovery, he told members of the Security Council that government authorities have made important strides towards improving fiscal performance and strengthening governance – towards the ultimate goal of achieving debt relief under the Heavily Indebted Poor Countries Initiative (HIPC) is within sight.

The international Monetary Fund (IMF) says Somalia owes $5.2 billion to its international creditors.  The country's Somalia’s Federal President Mohamed Abdullahi Mohamed ‘Farmaajo’ has repeatedly called on the country’s international creditors to grant Somalia debt relief under the HIPC, which the IMF and World Bank established in 1996 to ensure that no poor country faces a debt burden exceeding its capacity to service and manage.

Mr. Swan also called on UN Member States to help fund a plan to combat the impact of drought in Somalia, where there are some 2.2 million Somalis facing acute food insecurity, and 2.6 million internally displaced, fleeing conflict and drought. 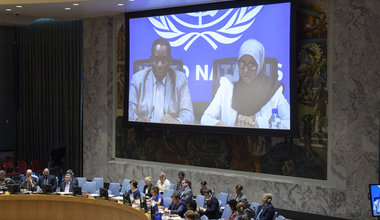 The humanitarian crisis in Somalia remains among the most protracted in the world. A so-called Drought Impact Response Plan requesting $686 million, issued by the Somali authorities and the United Nations, has so far received around $350 million.

“At the same time, we must focus on legitimate Somali priorities for longer-term development, as reflected in the Recovery and Resilience Framework and preparations for the new National Development Programme,” the UN envoy added.

In addition to Mr. Swan, the Council also heard from the Special Representative of the African Union Commission Chairperson for Somalia, Ambassador Francisco Madeira, and the Executive Director of the Somali Women’s Development Center, Amina Arale.

For Mr. Swan’s full remarks to the Security Council: