Mogadishu, 19 August 2019 – As part of the observance of World Humanitarian Day, Somalia today highlighted the contribution made by women humanitarians to peacebuilding efforts in the country.

“As the government of Somalia, we salute the women working in the humanitarian sector and despite the challenges they are facing, their courage and patriotism in serving this country is an effort worth emulating,” said Somalia’s Minister of Humanitarian Affairs and Disaster Management, Hamza Said Hamza.

The minister was speaking in the capital, Mogadishu, at a celebration of the Day, organized by the UN Office for the Coordination of Humanitarian Affairs (UN OCHA) in collaboration with federal government and Somalia Non-governmental Organisation Consortium. 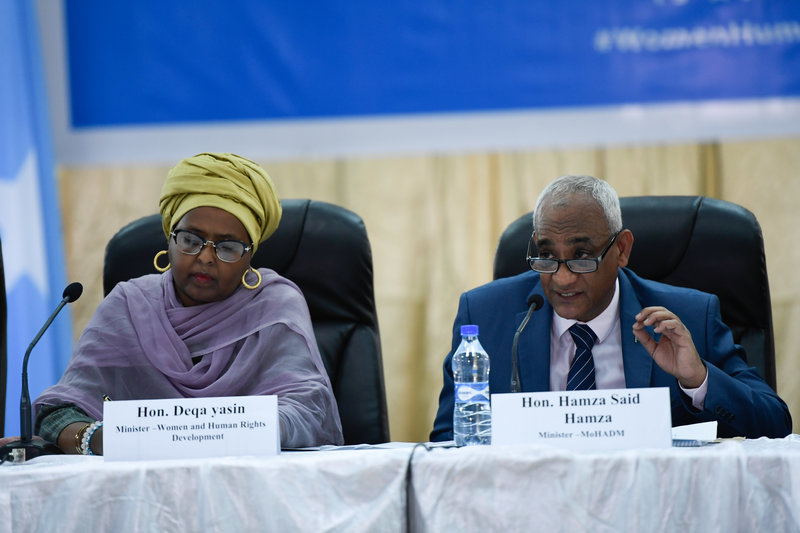 Speaking on behalf of the UN system in Somalia, the representative of the UN Children’s Fund (UNICEF), Werner Schultink, called for more involvement of women in humanitarian activities and flagged that there was proof that humanitarian responses were more effective when women are active players in the decision-making processes.

“Evidence shows that when women are involved in humanitarian action including at the decision-making level, the humanitarian response is more effective,” said Mr. Schultink who is also the acting United Nations Humanitarian Coordinator for Somalia.

The theme of this year’s World Humanitarian Day 2019 is centred around honouring the work of women in crises throughout the world, recognizing that they make up a large number of those who risk their own lives to save others and are often the first to respond in crises and the last to leave.

At today’s celebration a veteran activist and humanitarian worker, Aisha Shaur Ugas, was presented with a humanitarian hero award for her role in championing the rights of women and children and advocating for gender equality. Her colleague, Amina Haji Elmi, the founder of Save Somali Women and Children (SSWC), was also cited for her role in aiding victims of gender-based violence.

In her remarks to the gathering, the director of the Somalia Non-governmental Organisation Consortium, Nasra Ali Ismail, described Ms. Elmi and Ms. Ugas as patriots for opting to work in Somalia during its civil war while some of their colleagues sought refuge in other countries.

Ms. Ismail went on to note how women humanitarians sustained communities during the civil war by taking care of families and providing for vulnerable groups, while men were away fighting.

“Since most of our men were either involved in the conflict or were also victims in one way or another, women were at the forefront in supporting children, women and the elderly who could only flee from their homes to seek safety,” she said.

Ms. Ismail added that Somali women also contributed to peacebuilding by playing an informal role in conflict resolution between and within Somali clans during the height of the civil war.

While thanking participants for honouring her work, Ms. Elmi, popularly known as mama Amina, urged women humanitarians to continue fighting for vulnerable members of society despite the cultural and socio-economic challenges they may face. 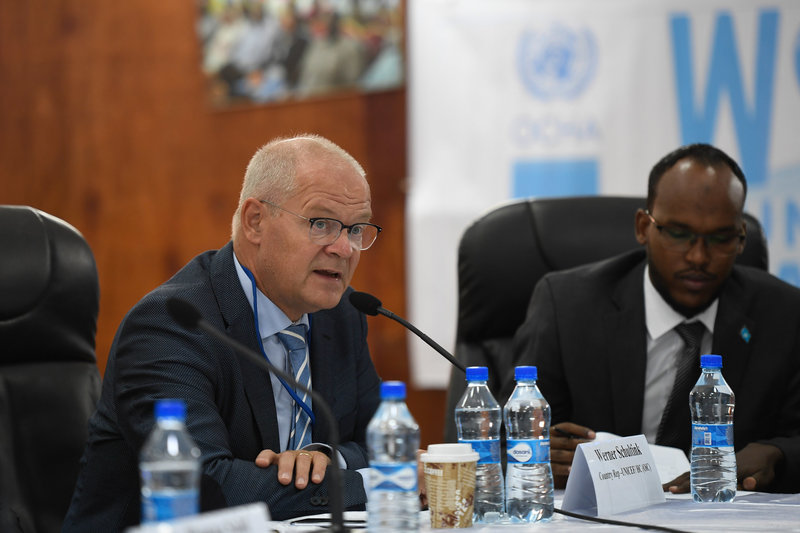 “Although it is an honour to serve in the humanitarian sector in Somalia, it is at the same time risky, especially when dealing with sensitive violations such as rape and sexual violence in Somalia,” said Ms. Amina. “Our field monitors and psychosocial support providers – who are mainly women –continue to face threats and pressure from different groups in Somalia.”

Celebrated every year on 19 August, World Humanitarian Day is aimed at honouring humanitarian efforts and advocating for the safety and security of humanitarian aid workers, and for the survival, well-being and dignity of people affected by crises.

The date was chosen in relation to a terrorist attack on the UN offices in Baghdad on 19 August 2003, which killed 22 UN workers, including the Secretary-General’s Special Representative to Iraq, Sérgio Vieira de Mello.