Mogadishu – With low levels of rain expected for the fifth consecutive rainy season, the United Nations is appealing for $1.6 billion to provide life-saving aid to 5.4 million people affected by the ongoing drought in Somalia.

“The number of Somalis on the brink of famine has grown tenfold since this time last year,” the UN Secretary General’s Deputy Special Representative for Somalia and UN Resident and Humanitarian Coordinator, Peter de Clercq, said today at the formal launch of the appeal.

The appeal is contained within the UN Office for the Coordination of Humanitarian Affairs’ (OCHA) 2018 Humanitarian Response Plan for Somalia. It also states that the number of Somalis in need of assistance is currently estimated at 6.2 million – or more than half of the country’s population. About 3.3 million of those people require urgent intervention, and one million are living in settlements for internally displaced persons.

“As always, children are the most vulnerable,” Mr. de Clercq said. “We estimate that by end of this year, 1.2 million children could be malnourished.”

In 2017, Somalia averted a famine through the combined efforts of the Federal Government, the UN and international donors, who together helped to mobilize $1.3 billion in humanitarian aid for the country.

However, Mr. de Clercq stated that continuing projections of below average rainfall for this year require another major humanitarian aid campaign on behalf of the people of Somalia.

Drought conditions in the Horn of Africa country have persisted throughout the last four consecutive rainy seasons, worsening the already-dire humanitarian situation in the country. Last year’s October to December rainy season started late and yielded below average levels of precipitation. A forecast for this year indicates a similar pattern during the next rainy season, which begins in April and ends in June.

The 2018 Humanitarian Response Plan aims to reduce acute malnutrition, reinforce the provision of protection services to affected communities, and strengthen resilience levels among the population. Vulnerable communities have fled the parched countryside and moved to urban areas in massive numbers in the past 12 months, due to the drought and insecurity caused by armed conflict. 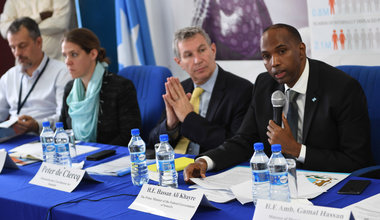 The plan was endorsed by Prime Minister Hassan Ali Khaire, who noted that Somalia had made significant progress on several fronts in the past year, thanks in part to international support.

In his remarks at the event, Prime Minister Khaire highlighted economic reforms, greater political inclusivity, peacebuilding and reconciliation efforts, and security sector reforms among areas of progress realized in the past year.

“It would be unfair not to recognize and profoundly thank our donors who provided record levels of funding in 2017 approaching nearly $1.3 billion,” he noted. The Prime Minister also stated that the unprecedented funding helped to avert a devastating humanitarian crisis in Somalia and represented the largest amount of money ever contributed towards humanitarian response in the history of the country.

The head of OCHA’s Somalia office, Justin Brady, flagged that this year’s humanitarian effort would also target large numbers of people in areas that are mostly inaccessible on account of prevailing security conditions.

“A number of our partners, especially our local non-governmental organization partners, have assumed a great deal of risk to themselves in trying to meet the needs of people beyond the urban areas where we have access.  That has led to abductions and other harm to humanitarian actors,” Brady said, adding, “There are a large number of people in areas that are inaccessible to these partners, but we will try to reach as many as we can.”

Joint Communiqué on The Situation in Somalia (AU, EU, IGAD and UN)

Mogadishu – International partners* are alarmed by public statements made by some officials yesterday suggesting that the closed-door, consultative, ice-breaking meeting of Federal Government and Federal Member State leaders is not making pr

Mogadishu – As Somalis prepare to welcome the Holy Month of Ramadan, international partners* express hope that the basic tenets of reflection, tolerance, forgiveness and reconciliation will usher in a successful summit of the Federal Govern