Mogadishu – The top United Nations envoy in Somalia today praised the work of the Aamin Free Ambulance Service in responding to the urgent medical needs of Mogadishu’s residents, and called for more support for the 24/7 volunteer-run service.

“Even though most of their work is not related to violence, they play an important role in providing the population a degree of comfort that when something very bad goes wrong, there is someone they can turn to,” the Secretary-General’s Special Representative for Somalia, Michael Keating, said during a visit to Aamin's offices in the Somali capital today.

“But obviously, they play an important social role as well, bringing people to hospitals and providing pre-hospital emergency treatment,” he added.

The Aamin organization started the ambulance service, and other social welfare activities, in 2006 because of a breakdown in services – such as those dealing with emergency responses – provided by local authorities amidst the violence which ravaged the country in the previous decade.

“Thousands of persons are disabled or killed in minor or major road accidents throughout Somalia. After any major accident, the seriously injured persons lie on the site for several hours waiting for shifting to the nearest hospital or medical centre. Often, delay and apathy cause loss of valuable lives, leaving many others injured, crippled and handicapped,” its website notes.

The service maintains a fleet of ten ambulances, field mobile units and rescue units in a state of readiness to meet any emergency in the shortest possible time anywhere in the capital.

Its services are provided by volunteers and garnered global attention in the immediate aftermath of the devastating car bomb explosion, which killed at least 512 people and wounded over 300 in Mogadishu on 14 October last year – its staff were among the first responders at the scene of the attack.

“The fact that it’s supported by volunteers is very important,” Mr. Keating said. “(Aamin) has got a very strong vision and mission and wants to expand. It’s great that a Somali organisation is taking on this responsibility and building the partnerships that enable it to deliver.”

The UN envoy called for increased support for Aamin, which in addition to being Somalia’s only free ambulance service, also operates throughout the year and around the clock.

During the visit, the founder of Aamin Free Ambulance Service, Dr. Abdikadir Abdirahman Aden, a dentist by profession, highlighted its progress since its founding 12 years ago, including training for its volunteer paramedic staff, the establishment of an emergency hotline and acquisition of vehicles.

“Before we started, people used wheelbarrows as ambulances and people used to die on the way to the hospital,” said Dr. Aden. “We changed that, and if you get an injury, you can call 999 Aamin Ambulance which is free.” 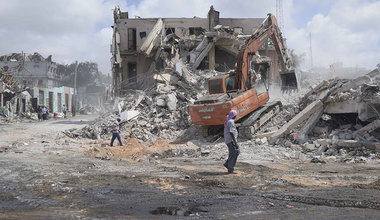 In the aftermath of the 14 October bombing, the ambulance service acquired basic life support equipment for its vehicles, and its paramedics and nurses underwent basic life support training, according to the deputy director, Mohamed Farah.

Dr. Aden listed some of the challenges still facing the service such as ageing vehicles, the need for more staff training, the lack of salaries for staff members and the inherent physical risks associated with operating in the Somali capital.

Despite those limitations, he reaffirmed the service’s commitment to help the injured and the ailing at any time.

The UN Development Programme (UNDP) recently donated radio communications equipment to Aamin, which becomes especially vital in the aftermath of a major terrorist attack when mobile phone networks are often jammed with the high volumes of calls.