Baidoa, 19 August 2018 – Speaking in regional Somalia today, the top United Nations official for gender equality and women’s empowerment highlighted efforts made at the national and local levels towards greater representation of women in political structures and processes, and encouraged further progress in this area.

“I am here to strengthen our collaboration with the Federal Government of Somalia and wish them well in their very difficult but promising journey of reconstructing their country,” said the Executive Director of UN Women, Phumzile Mlambo-Ngcuka.

“There definitely are many challenges for the people of Somalia and for women and girls in particular,” she added. “But there are opportunities as well for nations that happen only once in a generation.”

The UN official was speaking in Baidoa, the interim capital of Somalia’s South West State (SWS), which she visited as part of a delegation led by the federal Minister of Women and Human Rights Development, Deqa Yasin.

There, they met with the acting president of the federal member state, Hassan Hussein Mohamed, cabinet ministers, female members of the SWS regional assembly and civil society representatives.

“Somalia has a window of opportunity to advance gender equality,” Minister Yasin said during the visit. “We can have an impact on the constitutional review process to make sure (a future constitution) contains language that gives women opportunities in a very specific way so that girls and women will benefit in the future.”

The regional assembly boasts the largest number of female legislators among the country’s federal member states with 31 women members.

In his remarks to the delegation, acting SWS President Mohamed drew its attention to the relatively high number of women in the executive and legislative branches of the federal member state – the cabinet of SWS President Sharif Hassan Sheikh Aden includes two full ministers who are women, three female deputy ministers, and one female state minister.

“We would also like to congratulate you for the participation of women in the (state) parliament and elsewhere in society,” Ms. Mlambo-Ngcuka told the acting president. “We expect you to do even better in the future.”

Ms. Mlambo-Ngcuka’s visit to Baidoa coincided with World Humanitarian Day, which is observed annually on 19 August to pay tribute to aid workers who risk their lives in humanitarian service, and to rally support for people affected by crises around the world. 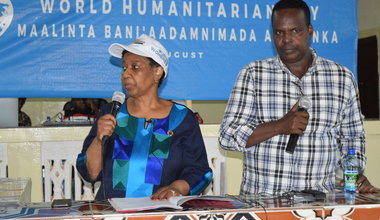 The many risks facing humanitarian aid workers in Somalia and elsewhere generated considerable comment during the visit. Since the start of 2018, an estimated 74 incidents of violence have affected humanitarian personnel, facilities and assets in Somalia, and seven workers have died. Of the 18 who have been abducted thus far this year, six are still in the custody of their captors.

“My message to our humanitarian workers is to say thank you for the sacrifices they make and for their dedication to our communities who are targets of violent people and extremism,” Ms. Mlambo-Ngcuka said at an event to mark the occasion.

“We are there with them every step of the way,” she added. “(We) call on all of those who work in the humanitarian space to have targeted interventions to ensure that the security of women and girls is addressed and their participation as leaders and not just as victims is also enhanced.”

The UN Women head also called on colleagues, Somali government partners and invited guests to observe a minute of silence for the passing of former UN Secretary-General Kofi Annan, who died at the age of 80 on 18 August.

On Saturday, soon after arriving in Somalia for her three-day visit, the UN official met with Prime Minister Hassan Ali Khaire and Foreign Minister Ahmed Isse Awad in the capital, Mogadishu, as well as with women representatives from the business community, politics and civil society.